What is rope embroidered pillow?

Choose the rope stitch method to make the pattern on the pillowcase of the pillow. Use your hands to flexibly match the rope and the needle to make them form a thick twisted line. This pattern is like a rope. This embroidering method gives the pillowcase a more high-quality hand feel, and it feels prominent to the touch. 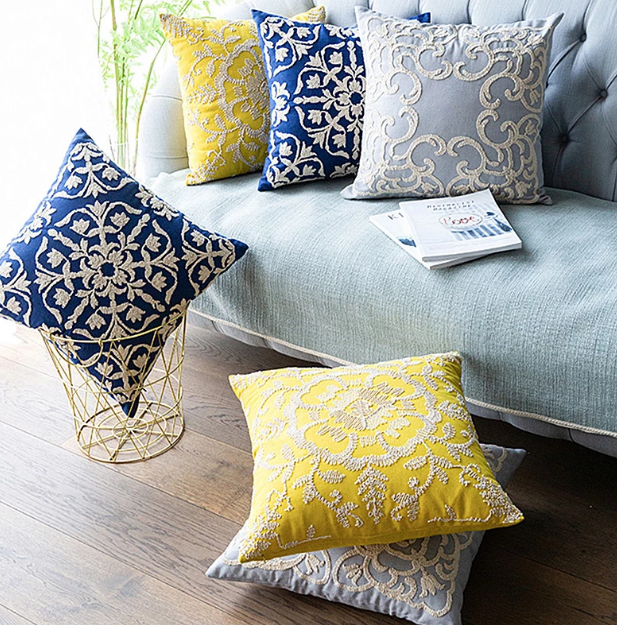 What other methods are there for pillowcases?

Except for the rope embroidered, there are many other methods to be applied in the pillow.

Embroidery thread starts from one side of the pattern outline and pulls straight to the other side of the outline to drop the needle. Set the singular number of stitches and the even number of stitches to drop. Flat embroidery can be divided into vertical flat, horizontal flat, and oblique flat, all of which require leveling, uniformity, practice, and smoothness. Flat means that the embroidery surface should be flat, not uneven; flat means that the needle drop point is flush with the outline, that is, the stitches should be even; Even means the embroidery thread is dense and uniform, without overlapping, not crossing, and not showing the bottom cloth; smooth is the direction of the pointer Follow the trend.

First use gold thread to lay the pattern on the silk cotton pattern, and then use embroidery thread to nail the dividing line. It is mostly used to embroider scales, feathers and so on.

Embroider gold thread on the outline of the pattern with gold thread, and fix it with short needles, and the stitches of the nails are evenly spaced. You can also use thick thread to nail embroidery thread, and there are also coiling and tacking tapes, all of which belong to the same needle method.

Use gold thread to circle and flat according to the pattern, and fix it with short needles. The stitch length should be even, and the front and rear rows should be staggered to form a decorative effect. Pinning thread generally uses a thin thread of the same color that does not show up, but also embroidered thread in a strongly contrasting color.

The application of hair needles. When embroidering bird hair, add feather stitches on the base of the embroidery, and apply embroidery layer by layer to express the texture of feathers.

It is a flat needle embroidery method, which can be used for color inlay and color connection. The characteristic is that the stitches are all inlaid, and they are divided into single sets, double sets, and sets.

The stitches are distributed in a radial shape, like a handful.

Arranged radially in line and in the direction of threading.

Cutting needles, but also called back needles and puncturing needles. The needle after use falls within the starting point of the previous needle.

Also known as standard stem. First embroider with stitches, and then thread the stitches clockwise to tighten each stitch, the effect is like a rolling needle.

Also known as arch needle. Pick up and drop forward to embroider, with stitches on the embroidered face and even stitch pitch. The acrylic cotton is clamped in the middle, and the quilting needle is slightly tightened, which has a concave-convex effect.

Also known as lock stitch, lock, and buckle. It is a commonly used buttonhole stitch. This stitch is one of the main stitches for carving and has a wide range of uses.

Also called hitting, pimple. Drop the needle on the embroidery ground with one circle at the center of the circle, or three circles with the needle, and drop the needle next to the original needle to form a loop. This needle method can be used for flower stamens or independently for flowers and other patterns.

also called cross stitch, frame flower, picking Luo, cross strand, and pulling edge. Make a cross pick according to the horizontal and vertical cloth silk. The base fabric for cross-patterning should choose plain weave, clear warp and weft, and countable cloth silk for picking, and it can also be used for printing dot positioning and picking.

It is also called patch embroidery and patch silk. The predecessor of applique is called pile silk. Cut into flower pieces according to the flower shape (note that the backlash is 0.5 cm longer than that of the flower shape), reverse the flower and paste it so that the edges of the patch are flush and there is no burr. Then paste it on the bottom of the cloth according to the flower shape (generally one or two layers, up to three layers, the stacking should not be too thick), and stitches can be patched. Use fiber needles for fiber repair, lock needles for lock repair, and le needles for lean repair. The locking effect is better, and the level of tightening is high. The stitch length and needle length of the lock needle must be consistent (usually lock 5 to 8 stitches per centimeter). Applique is also divided into flat patch, pad patch and engraving patch. Engraving patch has a transparent effect, and it can be used on edges to become engraved edges.

Also known as seaming and engraving, it has a transparent effect. It is divided into Yin carving and Yang carving: carving from the sky into flowers is the Yin carving, and carving the flowers at the bottom is the Yang carving. First quilt a thick line along the edge of the pattern, and lock the pattern like a buttonhole. The carved hollow can be connected (by-side supplement, that is, float on the bottom of the cloth and repeat the three threads, and lock the three threads together), so that the carved hollow can be combined and shaped, and do not cut the connection when carving the cloth. When cutting and embroidering, pay attention to the carving space and the flower shape to be transparent and clear.

Refers to the kind of embroidery in which a certain amount of warp or weft has been removed, and then knitted with needle embroidery. Take out the straight line of the warp (or weft), and then do stitches such as buckle and lock, which is called stick wire, or ladder. Draw a certain number of warp threads and a certain number of weft threads and then do needlework. It has different names depending on the needle method, such as zha eye (button hole), window, sail, square chrysanthemum silk, sweet-scented osmanthus silk, bowl silk... If the thread breaks, it must be locked with needlework to prevent the thread from falling off.